Tutorial: how to waste 2 hours of potential sleep.

So I get home from my 9 hour shift and go online. I see a photo of the contents of someones handbag and an invitation to show everyone mine, and I get all excited and I do it. I write the post and...

Now I'm a bit buggered. A sudden complete and catastrophic loss of motivation. It could be something to do with the two hot cross buns I scoffed as I lay out my handbag. It could be the long shift, or the fact that my laptop has warmed me up and and I've slid further and further down my bed so that now I'm practically lying down. It could be that it's 1am already, and I'm just tired.

About the only thing I've done is this. 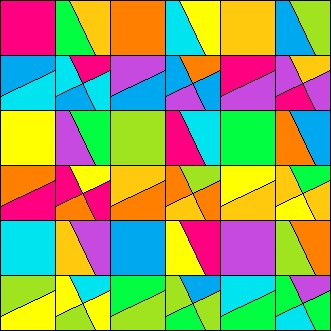 It's what I did with the Newsprint Mingle, but I wanted to see if I could do it with a proper regular spread like I had originally planned. This works with the 9 colours following spectral order left to right, top to bottom in the big blocks, with the colours going clockwise around them starting at 9 o'clock. I'm fairly sure that no matter what point you start at, there will always be one colour connected to itself, though I haven't yet tested whether or not they will if you go counterclockwise. Logic tells me they still will.

30 minutes later and I've started playing around with the idea of the spectrum going lenghways, and seriously, how cool would it be if I could get it to go vertically as well. It would be like those boxes where you put the words in so they go up and down and side to side and you can read them both ways.

It doesn't work. This has 1 big square, 2 halves and 4 quarters of each fabric, and the places they have to be in wont let the same order of 9 colours fit. So I did them all in one direction. 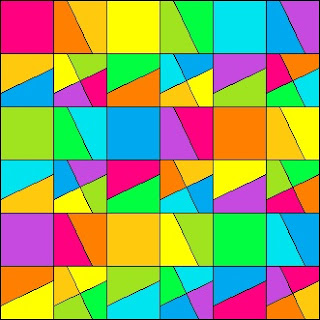 Since then I've had a go using only 3 colours 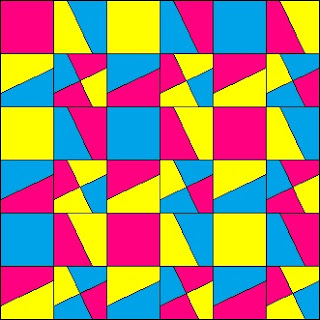 And then I gave that a go on a standard grid. 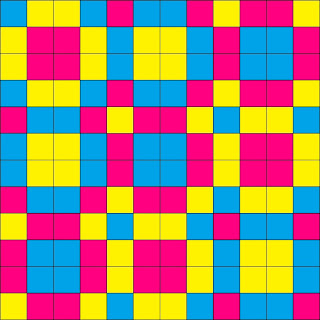 Here they all are next to one another

I like them all, probably the second one best. But it would really only work if I found 9 nice graduated solids.

I have a folder on my computer full of these... Many many wasted nights on things that usually never get made, because I like them in the solids so much but I can never find them the right shade. 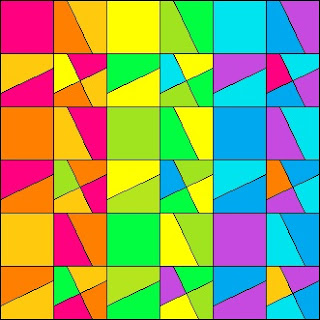 I just thought it up but already I desperately want it. Perhaps made from 9 fabrics of this? Fluro solids that exactly match the picture would of course be preferred, but I could make this work. Or this, but it's a bit pastel.

And that my friends, is how to waste two hours and not really achieve anything. If you hit the design you like with ahead of schedule, spend the remaining time hunting for suitable fabrics onine.

To properly "waste" the evening, decide you don't like/can't afford any of them and go to bed.

Does anyone know where I can get one of those Kona colour cards?
Posted by Sara at 3:17 AM