Why do people not stop me?

You know what I really need to learn how to do? I need to learn to not go onto youtube. Because it's after 3am now, and I've done nothing but watch videos for the last 2 hours.

What's worse, they're all quite short. I'm fairly sure, not that I've ever loaded anything on youtube, but I think there's a 10 minute max, which means that when you're watching it you can't really do anything productive, because you've got to click on a new video almost straight away. So although I was fairly productive till about 1am, as soon as I ran out of Time Team and got onto the internets, production pretty much ceased.

Buuuut, if I'm honest, I didn't mind. Because, really, straight line quilting is bloody boring. Still, I've realised that my work in progresses are fast becoming unfinished items, and maybe I should start turning all my lovely tops into quilts. Bob's quilt had a back and was all basted already, and I went into Spotlight to try to find a backing fabric for the new one but couldn't find one, but I did find a heap of sheetings for $3p/m, one of which went quite nicely with my second-last of 2010 so I basted that and got quilting on that too. Neither of them are finished, because that would be obvious and straightforward; instead I've done about half of each. But still, that's pretty good progress.

The other thing I got done today was the finishing off of my Newsprint Mingle quilt top. 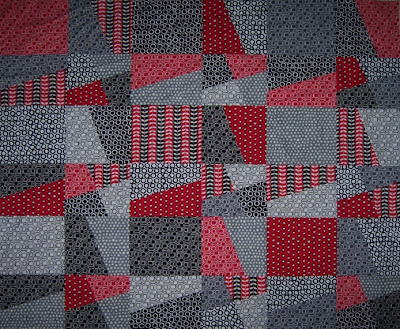 When I planned it, I was gunna do it with a regular pattern repeat, but then I didn't like the balance so I've tried to even it out more. The fact that most of the stripey ones are across the middle is less obvious in real life; it's the brighter red that pops the most, and that's the one I've concentrated the most on spacing.

The handy thing about this is that the only points that match are the ones of the big blocks (well, in the middle of the all wonk block too, but they don't count) so there were no wonk-to-wonk points that I had to match up, as that was my big struggle with the last mingle quilt. I've still got 4 mingle bundles left, two each of the blue-orange-brown (what I used for the first one) and the purple-green-brown, so I'm not done with the fabrics yet, but this one's all done.

Unless I decide to give it a border. I've never given a quilt a border before, but all my trimming meant it ended up quite a bit smaller than expected (about 110 by 130) so this might be my first time.
Posted by Sara at 3:46 AM