So today I went into Spotlight with the handy $10 off vouchers that Helen got but I didn't, and bought myslef some more pinks, purples and oranges. Unfortunately, despite giving me $10 to spend on whatever, they didn't give me that much in the way of whatever (by which I mean solids) so I had to get a couple of tonal prints. Still, they're pretty good at reading as solids, so one must forgive.

I also bought needles, because since I'm not spending actual money, I figure it should be spent on stuff I don't want to have to spend money on. I'm okay with spending money on fabric - that's what money is for. But spending money on machine needles and pins is almost a waste of it - if it was up to me, the government would subsidise my new stepp-nadels. Or at least let me claim it back on tax.

Tonight I got home and a got chop happy. This is probably the biggest variation between the metric and imperial maths I've ever worked out, simply because I did it backwards this time - instead of doing myself a lovely bit of number-crunching and then adapting it for the internet, I did the imperial math first (because I liked the idea of having the "scraps" be exactly the same size as half a charm square*) and then pretty much just picked random numbers for mine, since I would be cutting up actual fabrics for the scrap pieces anyway. I don't think I've really ever used 13 as an important number in a quilt before, but mine is all 13s and 6s and there's a 29 thrown in there for good measure too. But it all fit when I did it with my numbers and I'm fairly confident that the inches will fit too. It consistently comes out to 42 inches, and that's not quite as wide as fabric is.

Anyway, since this pattern is laid out by eye rather than by design, I got my nice neat little 6cm squares and laid them all out in a six by six grid and shuffled them about till I liked them. When I was fairly happy I squished them all up on top of one another so they made a tiny tiny version of the quilt. 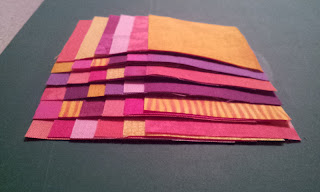 And once I'd taken myself a layout photo, 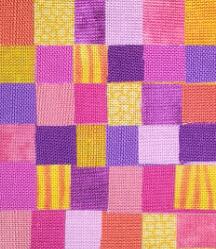 I remebered I had macro focus. 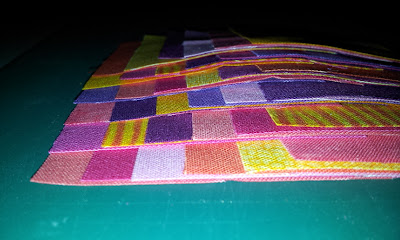 And a damn good one at that.

Of course, since I had something I was happy with, I figured I'd play around with the 6x13cm rectangles, and had a go at a more graduated layout. 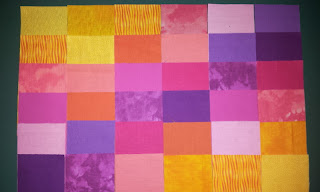 And now I'm really not sure which I prefer.

Thoughts? (keep in mind that the random layout shows a 1cm square of the fabric whereas the graduated one shows about 6x4cm. They will be rectangular, and have a small rectangle of contrasting print in the off-centre)


*I have very few scraps. I can't be the only one. I also like things to coordinate.
Posted by Sara at 3:27 AM