So today in my luchbreak I went to Sotlight cause I suddenly remebered my best friend is having a baby in 4 months. And while that may seem like a long time away, lets not forget the trauma of the last quilt we had to rush to finish before the baby got cut out, or, for that matter, the late nights of last week making Casey's quilt. Not to mention the fact that the due date has already been moved forward two weeks, and she doesn't even want to know herself what she's having, let alone tell those of us who have, let's say, been asked to make it it's first quilt.

I think, if there was a chance there was a tiny penis growing in my belly, I'd want to know. And I'd want to tell people. Everybody. I'd just go up to random strangers on the street and go "tee-hee, I'm making a penis, right now," But then, I can be a tad immature. That's why I make quilts instead of penises babies.

Anyways. I went and bought some solids, cause solids are a) easy and b) cheap. Or well, most of them are. This is the pile I picked, and I should point out that they're actually a lot more muted than they look - more like intense pastels than actual brights. 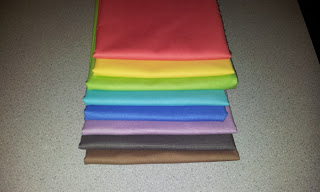 The brown, it turns out, is a "tea dyed linen" which means it's $7.99p/m. That's not too bad, though I'm a tad worried it's either dyed with actual tea, and therefore going to stain everything when I wash it, or going to shrink way more than the cottons.

And the yellow, which looks and feels just like all the others (but was the only solid yellow quilting fabric they had) was grown organically, and therefore costs a whopping $14.95p/m.

As for what I'm actually going to do with it all... I've no idea. I've handily re-worked the math I did for Casey's quilt so I can do it much more efficiently by using printed scraps in the middle, but I think that it works best with a tonal range as opposed to a spectral one. I've picked some purples/pinks/oranges to have a test run with tomorrow night.
Posted by Sara at 1:04 AM