I am home. I am slightly sunburnt and a bit achey. I am tired. Very tired. But I had a hell of a lot of fun. And so did our first-timers apparently, since they both seemed pretty keen for the next one.

I spent a lovely bit of time this morning chilling out here, on a rock in the middle of the Glenelg river. 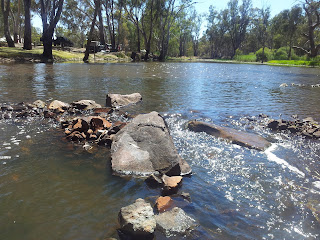 Of course, at this point (right next to the ball site) it bears no resemblence to the river we went down to for a swim later thisafternoon. It has to travel for 150km, pick up a bit more water and carve itself a lovely big gorge through the limestone before it becomes the Glenelg river I spent my childhood upon, but damn the bit of it that passes through Harrow is pretty.

It's shallow enough at this point for cars (well, high riding ones) to cross and even though it was a bit slippery, you could walk through the bits where you couldn't jump form rock to rock. Later on there was people actually swimming in it, but we decided we would just come home and go for a swim in it a bit further south, though I didn't end up in the water - Jess spent so long getting in that the sun had fallen past the cliff and it was getting a bit nippy.

I've already had an hour or so of nap time earlier on but I think it's about time to add to it. Electric blanket, big fluffy pillows, come at me!
Posted by Sara at 12:03 AM