So tonight, I baked a cake. I also made a bag, but whatever, I've done like 5 of them in the last month. A cake though, that is something new! 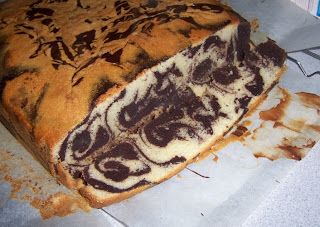 So it all started with someone on facebook saying they were going to make a cake, but then they had no butter so they couldn't. By this point though, cakes were already being made - I will confess mine is a packet mix - while I can make bags from scratch I doubt I could do a cake. It's actually two packet mixes, clevery plopped together to give good swirlyness. But because of this it was too big to fit in any of our plastic containers, so a fair bit had to be chopped off. It felt like quite a waste, since it took about an hour and a half to cook. And is still a bit too moist for my liking - I am a fan of dry cakes. But it looks cool, and on the internet, that's enough.

This bag is even cooler in real life than on the internet. 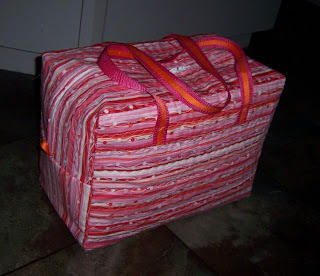 I took photos as I made it, so I can do up the pattern sometime soon. I gave it a layer of cotton quilt batting and one layer of 1600F interfacing, and that seems to be a good blend between stiffness and softness. Outside fabric is Bloom by StudioE, inside is a bright goldy-orange. 40cm long, 30 high and 22 wide, no extra pockets.

I prefer the bag, but the cake is the more remarkable achievement.
Posted by Sara at 3:51 AM