Apologies for the cheese induced delirium.

Do you ever wonder what happened to those people who dropped out of the blogosphere? The ones that used to post all the time, that you followed the lives of, who one day just... vanished? I always hope they're doing fine, living their lives without sharing them with the world but sometimes I worry. I worry that something happened to them, that there's a reason they're not online anymore.

There was a thing on facebook a while ago that said "After I die, I give you permission to hack my account and change my status to is chillin with jesus" - I'm not at all religious and nor do I believe in an afterlife, but the point stands. Should something happen to me, I expect someone to hack my account* and let everyone know. And for someone to finish up my half done quilts.

Speaking of half done quilts, I now have four less. That still leaves one unfinished top, five quilts than need a back and basting, two that need quilting, and two that need binding. But that's ten of a total fifty, or an 80% completion rate. I'm happy with that.

I've also realised that if you must bind, bind lots. Binding feels like it takes forever, and forever takes just as long if you do it four times as if you'd done it once. Admittedly tonight I only did the second (and third, because I bind in my own special way) lots of sewing - I'd sewn them on and done the join and ironed them around and pinned them down last night. It would seem that what I've actually decided is that if you must suffer through multiple eternities, make them all different.

Or, possibly, what's really happened is that I've eaten too much cheese and become a bit delirious.

Anyway, back to the point. Four more quilts are now all bound and ready to wash and crinklify*

Two are in the machine now, and I'll put the others in when they're done, and hopefully we'll get 5 minutes of sunshine tomorrow for me to do the photos on the grass thing.

The other thing I've gotten done is the top for quilt # 50. 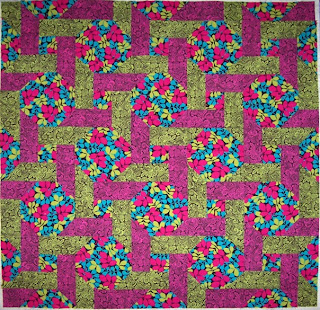 I love the fabrics and the colours, but I have to admit, they're not right for this pattern. The Falling Leaves fabric having both pink and green in it means that depending on how you're looking at it, the background either merges into the rings or pops to the foreground. I can't help but think of it as my Escher quilt, even though that's really not what I was going for. I'm gunna have a do over - I've had some fabrics in my stash for at least a year now, a pink, blue and green with flowers that should work - it's been in an envelope in a box and I can't remember how big the flowers actually are, but if they're fairly small (I recall them being a bit under an inch across. I could be wrong) then it should be fine.

Parent's should be home tomorrow night, so that should cheer up my dog, prevent my house from making any more threats upon my life, and curb my until-4am sewing seshes. Still, it'll be nice to see them again, as much as it has been nice doing our own thang for the last fortnight.

*if shouldn't be hard - firefox knows all my passwords.
** my submission to the quilting lexicon for 2011.
Posted by Sara at 3:24 AM