After an extended bout of tech support for Mum, I got stuck into the Pretty Awesome quilt. I got it quilted, trimmed bound and into the washing machine before work. But since it was only just, I didn't have time to go to Spotlight and get vliesofix for monster eyes. And unfortunately, we don't stock it at woolies, so I've wasted tonight on eBay trying to tell myself I don't need (another) tablet computer.
A 7" Android one with 2gig of storage and an 800mhz processor is not enough of an upgrade from the palm pilot (which needs a new battery cover) to justify spending $200 on, and a 10" Windows one is not enough of a size improvement on my already touch-screen laptop to justify spending $500 on. If there was a best of both worlds - a 7" Windows OS with a 100gig harddrive and 1.6gig processor, I'd absolutely get one. But there's not, so I'll just buy the palm pilot a new battery, since the uprated ones don't fit under the standard cover, and come with a bigger cover I can use instead.
Back to the quilt... and I think this one I'm gunna iron. I don't usually, being a big fan of the crinkly, but the batiks don't look as nice as most quilt fabrics do - they look more like scrunched up paper. The only other quilt I've ironed after washing is the all pink batik one, so I think it will probably be a trend. 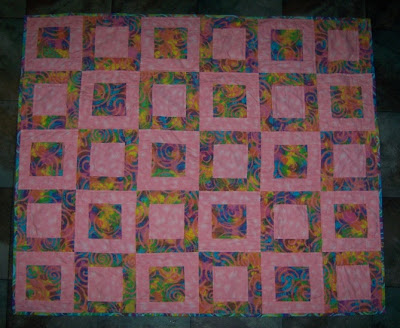 I bound it in the blue version of the same batik, which is similar enough that you don't really notice it, but different enough that it doesn't just blend at the edge. I also managed to do it as a wide binding even though the actual cut wasn't wide enough - the good thing about the batiks is they hold their crease so well you can fold it unevenly and it will still work, whereas when I've tried it with regular fabrics they shift as you try and sew them because they don't have the stability of both the inside and the outside having been sewn down. 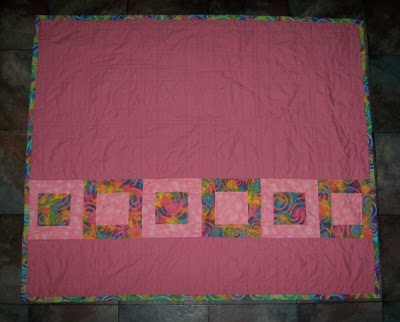 I went with a solid for the back not only because it was half the price, but because again, I didn't want one of the two fabrics drifting off into the rest. Also note the fact that my piecing is aligned to the front and it's quilting lines - it was the only way it would fit but it was a bit of a bitch to do. I'll take some more photos once I've ironed it, but the quilting lines up pretty damn well to the front and the back. On a couple of the across ones it is only a few milimetres or so on the right side of the seam, but still, I'm feeling proud. There's a reason I usually piece my backings at 45degree angles, and this is it.
Posted by Sara at 2:03 AM