A success, and a mayday call...

Worryingly, and for no apparent reason, my laptop appears to not be charging. I don't think I can deal with it dying as well as my car :( Hopefully it is just a problem with the power cable, and even more hopefully it's just a problem with the bit that goes from the board to the box, cause I can get another one of them for about $8. if it's the next bit along, I might have to get one of those interchangeable ones. I doubt it's a problem with the battery since that's still showing as being present and charging down. Hopefully it's not a problem with the plug input, or it will have to go stay with Helen and Steven for a bit.
Anyway. Over the weekend i had held a faint hope that maybe I could do 2 quilts in the 2 days I had off. As of last night it wasn't going well, with machine tension troubles, Paul Hogan and a major redesign holding me up. I got the two tops done, but it was 3am, and I wasn't as far along as I thought I needed to be.
Tonight... well, no, I didn't get them finished. But still, in about 36 hours (since I didn't start till after lunch yesterday) I think I did okay... 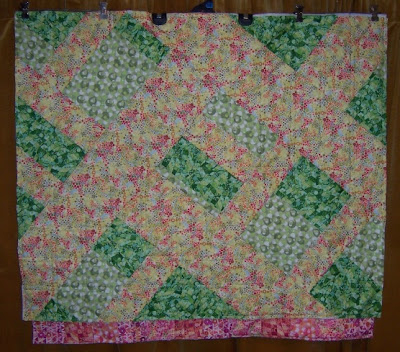 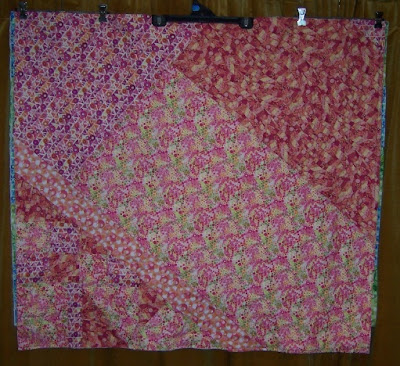 ...since if you look closely you'll see that the one behind it is the top side of the other, because they've actually been fully quilted (something you cant see in those photos) 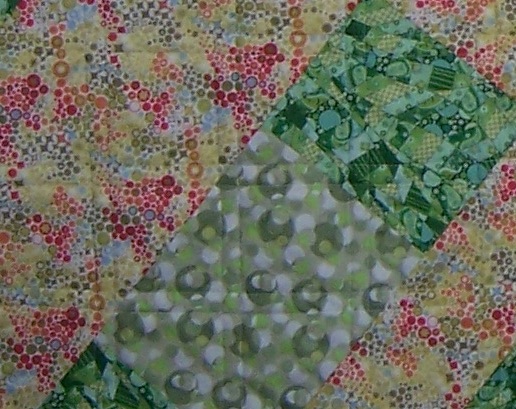 That's not a particularly good picture either, it being a blowup of the above photo, but at least it proves I'm not making it up. I have done essentially FOUR quilt tops, and quilted them together, in 2 days.
Now they're not that big - 98x118cm and 106x115cm, but still. I have done it all but the binding, which I have made for the pink one and rolled it into a nice bundle and all, but I'm tired adn it seems like a good place to stop, since I'm not actually sure what to bind the other one with. I was originally gunna use the blue, but I think it would look a bit odd from the back. I've cut 9cm wide strips of what I have left of the 2 greens, which comes out to about 3.5m of the light one and 2.1m of the dark one. I'd pu them together to do a pieced border, but I've no idea how.
That's tomorrow's problem anyway. Tonight's problem, as of just now, is maintaining power to the lappy. The little box is cooling down, so I'm figuring it's not getting power either, since it's usually a good little hand warmer. So, if I can find it's original power plug, which had an American end (since I imported it) I can steal the adapter form the divx player (also imported) and use that till I can get into anvil to buy another cable. Byebye $8, and thankyou for not being a huge expense..
Posted by Sara at 1:09 AM