More pointless stuff I got sucked into...

Even when you're not actually buying stuff on eBay, it can still get you.
For a while now, Vistaprint has been doing advertising on eBay. They're in the annoying flashy things at the top of the screen, that can only be killed by disabling flash player, which then renders youtube unusable. Home loans and stuff are easy to ignore. I have no home, therefore I need no loan. Avoid.
But for a while now, when a bundle of fabric arrives in the mail, it usually has a little business card with it. And they all have a little sticker on the back, which covers a little bit of text. 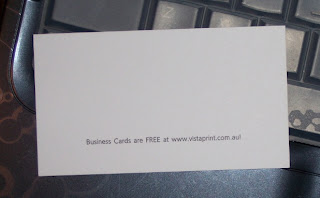 These people had succumbed to the flashy thing at the top of the screen.
Now the whole point I suppose is that the first lot you get are free, but there are limits on what you can do, and of course you need to put the little sticker over the text on the back (or you can pay more for it to not be there) so then you upgrade and upgrade and upgrade until it costs a fortune. Moreover, they have a slightly cruel pricing scheme, wherein the sooner you want them, the more it costs. You should totally ignore this though, since I got mine on the 21 day postage ($12.87 after they add GST, which for some reason isn't an included thing even though it's supposed to be under law) and it's here 5 days later. 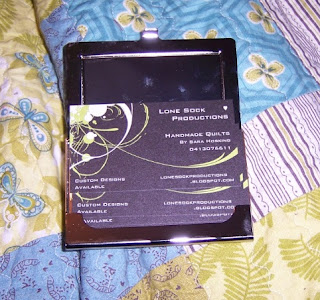 They are random, and pointless, and I accept that I will probably never ever use them. But they cost 8c less than the yoyo maker I bought at Spotlight the other day and, having now tested, will probably also never use. They also sent me a free holder, which was shiny, but is now covered in fingerprints.
And then, because I am a sucker, and because they emailed something to me that said that 250 of the premium (design your own) ones were now also free for me, I did that as well. Unfortunately I paid six whole dollars (5c more than a KFC kids meal) to upload my own photo, and then another 6 whole dollars to get printing on the back, because I had just spent ages in flash and photoshop making my pretty logo, and didn't want to sully it with information. So that's about $25 all up, which isn't that bad since they're listed as being $41 before all the additions that I made. Or am I a sucker for thinking that shit?

For all that it cost me the extra $6, I made the info on the back pretty sparse though so I could use them how I actually wanted them, as price tags on stuff. There's been a big push toward having a crafty/baby market in the area (two are popping up over the summer that we know of) and I think some pretty tags would go a long way to covering the fact that sometimes, my quilts wonk. So, pretty tag (actual sew-onto-the-quilt labels are on my to-spoonflower list) with my name and number and the address of this place. I probably should have put my email address instead, but it's nice to know that people stop by (10 of you came and read me being sad about my car, which isn't craft-related at all) and I'm not so desperate about sales that I mind if someone comes, reads, thinks I'm terribly immature, and decides for that reason not to buy my stuff. It will no doubt be quite pretty, so I will keep it instead. Or sell it to someone else. 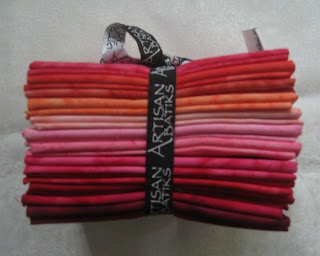 In other news, this has also arrived, and caused me a bit of concern over what to do with it, since in spite of everything, I'm not actually that comfortable with batiks, and I would certainly not be comfortable pairing them with a print. So that meant something made exclusively from them, and with 12 fabrics, some of which dont look nice next to some of the others, I was struggling to come up with anything.

Today though we went to see Helen to show her Mama Jan's quilt and Esther was actually wrapped in the bubble and squeak mini quilt, which was nice, since I tend to get a bit paranoid that any time I make something for someone, they just hide it in a cupboard. I get that Esther's actual quilt is quite big, too big for a month old baby, and since the mini quilt is currently being used instead, I'm less worried about the fact that they look tiny when you sit them next to a cot one. 80 by 100cm minis are a perfectly reasonable baby size.  Also, you only need 6 fat quarters per side, and this bundle has 12. So it's split in half, light and dark, where they all match one another, and I'll do the dark as the simple "big square, 4 little squares check" thing I did for the bubble and squeak and the beeswax quilts, and on the back I'll use the light sides for crazy piecing, maybe with some white in there too, because the weird angles seem to use up more fabric, and white cant be batik-d anyway because its... white. It wont be unisex, but so what? Some people are nice enough to tell everyone what they're having. It'll be too small for me to use and then get attached to (although so is the wonky quilt, and you'd have to offer me a LOT of money for that one) and I know exactly how much the fabrics cost ($30 bundle, $8 batting, $2 threads) so pricing math should be simpler.

Not going to be done now though, since we're leaving for rainbow tomorrow. We're taking the van, which is manual, and so will be driven by Casey, So I need to sort myself out some hand crafts to do on the way. I also need to pack, set up the GPS (the van's speedo seems a little out) and sort out foods for the trip. Maybe if I just stay up all night doing that stuff, I can sleep on the drive up there (we have a bed in the back, for all that I would be unseatbelted and illegal) Thus negating the need for me to sort out handcrafts or food.